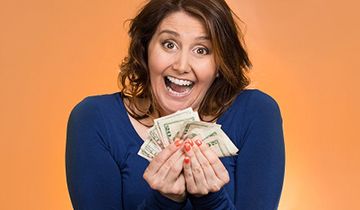 For many beginners, the online casino games are very similar to quick sands, with many of them sinking without even knowing it. The best case scenario is to convert the first deposit and the associated bonuses into solid cash and then make a string of withdrawals. What usually happens is that players are less successful at their first try and many of them have to reload their account several times.

5Dimes has these subsequent deposits matched by a certain percentage, but also runs the immensely popular casino rebate rewards program. The name is self-explanatory and players are eligible for a reimbursement of up to 21% of their overall losses in all casino games. The cashback is calculated based on the money lost by players who spin the reels of all the games, both those played in the live casino section and those pitting the players against the random number generator.

You decide the rate of reimbursement

Bonus Casino, Live Dealer Casino, MatchPlay Casino and Mini Games are all included and the only thing that players need to do is to contact the customer support and apply for the cashback. Once they get the confirmation that their account has been converted into a cashback account, members can follow through with their plans and start playing their favorite games.

Not surprisingly, highrollers and those who bet larger amounts are the ones that will benefit more from this promotion, because they will have more cash refunded. The casino losses will be updated on a daily basis and players can check them out every night at 1 AM, after the customer service staff performs the necessary calculations. Different things, such as the cumulative daily casino losses, the winnings and also the performance over a certain period of time are factored in to calculate the casino rebate reward.

Once members have their casino account converted into one that is suitable for reimbursements, players will have to choose between several packages. The most straightforward solution is to apply for the 21% rebate reward on overall losses and wait for one month to pass. The reimbursements are made every 30 days but the advantage is that you will have more than a fifth of the net losses returned to your account.

The alternative would be to settle for a smaller percentage of only 14% in exchange of having the losses refunded on each Wednesday. This component of the casino rebate reward is preferred by those who hope to get a significant percentage of their money back on a weekly basis rather than once per month. Losing 7% is not such a big deal if you plan on doubling your efforts over a shorter period of time, instead of playing at the same pace over 30 days.

Choose the refund package suitable for you

Last but definitely not least, players who want to push the rebate campaign into overdrive, can do it by accepting a refund of 7%. While the number pales in comparison with the aforementioned rate, it has losses refunded every day and the cash is credited at 1 AM. Players can apply for one reimbursement or the other and then change the rules as they go, but they can only have one casino rebate reward active.

The minimum amount that players can collect when participating in this program is of $2.50, but the online gambling operator can raise the limit to $50. It is even possible for 5Dimes to limit players to a single option out of the three mentioned above, more precisely the monthly reimbursement program. This will only affect those who are suspected of abusing the casino rebate reward program.