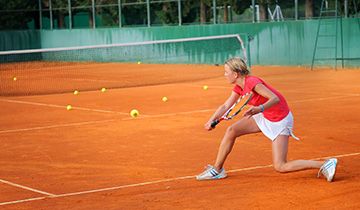 Football is still the most popular sport worldwide and not surprisingly it is preferred by both bookmakers and punters.

The number of sports betting bonuses, no deposit free bets and other cash back offers that gambling operators link to this sport explains why it is still gaining traction.

Tennis comes in second and even though it has a wide gap to close, it’s well-positioned to challenge the leader, especially when Grand Slam tournaments are underway.

Not surprisingly, this is also the time of the year when the number of tennis betting offers increases, as the popular sport comes into the spotlight.

Some of them are tied to ante-post wagers, which require players to indicate the name of the winner prior to kickoff, others apply on a match by match basis.

In most cases they can be used in conjunction, so players have an additional incentive to watch most of the games and stay hooked to tennis throughout the tournament.

Tennis betting promotions are usually resulting in participating players benefiting from better odds margins or having their stakes refunded through ACCA insurance, sometimes.

It doesn’t happen that often for bookies to require minimum odds or bet that exceed a certain size and when this is the case, the thresholds are more than reasonable.

It is also customary for players who have welcome bonuses and want to clear them to be prohibited from participating in applying for an additional tennis betting free bet.

One thing about tennis matches that virtually any gambler is probably aware of is that the odds on the favorites are usually very low. The fact that the outcome of the match depends exclusively on the ability of a single player to dominate the opponent explains why variance is not such a major inconvenience.

The obvious result is that punters have no choice but to wager huge amounts on the favorites or to resort to multiple bets and accumulators.

Eventually the outcome is the same, because whether you bet more on a single game or add multiple events on the same betting slip, you are bound to win more. In both cases players are taking chances, but these can be mitigated by being a part of tennis accumulator money back campaigns.

The name is self-explanatory, with players having their losses refunded if a single selection lets them down, with the bookmaker deciding how many games need to be added on a betting slip.

When it comes to bonuses, players unlock increasingly larger amounts if they bet on more competitions, but this system doesn’t work the same when it comes to refunds. While these terms and conditions vary greatly, the vast majority of money back on tennis campaigns require players to bet on at least three events.

There are also minimum odds involved, but players who comply with all these demands will be eligible for a tennis treble money back.

The best case scenario is obviously to win the ticket and have no need for the refund, but having a safety net in place is also comforting. The thing about the reimbursement is that it is awarded in the form of a free bet like the one at William Hill, which is subject to a one-time wagering requirement.

Players only get to keep the profits they make while the stakes are subtracted, therefore they are forced to bet on a larger amount. In most cases it is not permitted to use the free bet on accumulator bets, which is ironic to say the least.

The tennis treble insurance is just one of the ways of cashing in on the generosity of sports betting companies who try to encourage players to place accumulator bets. A more straightforward solution would be to chase better payouts and the obvious way to secure them is to add more events on the betting slip.

Bookies will boost your profits incrementally, with some of them going as far as to offer an additional 50% of whatever you win, as long as you bet on as many as 14 events. If you are confident that you can predict a big multiple bet you should try to make a pool bet for tennis. You can win the big jackpot or some consolation prize, depending on the number of winning selections.

The tennis accumulator money back campaigns are not the only ones that have the stakes refunded if an event acting as a trigger occurs. In fact, some of the most popular money back offers are actually revolving around ante-post wagers. By betting on a certain player to win the tournament, players will sometimes be provided with the insurance of being fully reimbursed if a designated player wins.

There is no rule or universal guidelines that apply to these promotions and the nominated players are truly unpredictable, as each bookmaker has its own ideas. Unlike the tennis treble money back campaign which has straight and predictable guideline, in this case you will have very little control over what happens.

In a nutshell, punters bet on the player they consider capable of winning the tournament and if he or she is eliminated, will have no choice but to root for the nominated player.

There are a couple of things that can influence the decision of bookmakers, such as having local favorites designated as triggers for the reimbursement. Andy Murray to win the Wimbledon, Serena Williams to prevail at US Open or Leyton Hewitt to make a deep run at the Australian Open are all good examples.

As with all money back on tennis promotions, these ante-post campaigns have certain limitations and players can only be refunded up to a maximum amount.

When searching for the best tennis betting bonus, punters are frequently checking out the promotions centered on the winner of Grand Slam Tournaments. While these campaigns are pretty good and get players fully immersed in the gaming atmosphere, some great offers are made on seemingly obscure games. Bookmakers are trying to get players hooked on their tennis betting offers and as a result offering enhanced odds on regular basis.

These are absolutely random and bookies choose the game of the day with complete disregard to the names of the players involved. It is more common for them to offer a tennis betting free bet on matches where the athletes are evenly matched, than on those fixtures where we have a huge favorite and a clear underdog. The purpose of these bonuses for existing players is to make average games interesting and bookies know that punters can’t resist freebies of any sort.

At the opposite end of the spectrum, we have one of bets that focus on particular players throughout a Grand Slam competition. These can’t be used in conjunction with the special bonuses applying on the winner of the tournament or any ante-post bets. That’s why it is recommended for players not to stick to a single bookmaker and instead open multiple accounts with diverse gambling companies to keep their options.

Perhaps the most numerous tennis betting promotions are the ones offered to those who sign up for a real money account and make a qualifying deposit. These deposits are usually matched by 100%, although the ratio can be higher or lower and many of the first bets are risk free.

When gambling operators have the interest of getting players to bet on tennis, they will offer money back deals. If they lose the first bet, they get reimbursed in the form of a free bet which is to some extent a consolation prize and also a second chance. UK players have lots of such bonuses, profit from this if you are from the right country.

The welcome bonus is not necessarily a free bet itself, although there are bookies who prefer not to award cashable amounts. Ideally players will benefit from a welcome package that includes the standard financial incentive and a tennis accumulator bonus or an extra free bet.

This doesn’t happen all that often though and if you want to maximize your chances of being the lucky recipient of such an incentive, check out the offers anticipating Grand Slam events.

Sometimes you can cash in on the best tennis betting bonus by simply using a payment method or mobile apps supported by the bookmaker. Many online gambling operators are trying to highlight the advantages of using electronic wallets, certain credit and prepaid cards when making deposits. To convince players they are willing to provide them with the impetus to make a qualifying deposit, which is matched at a certain ratio.

The same applies to those mobile bonuses awarded to those who use their smartphones and tablets as conduits to make deposits and wagering. There are almost always strings attached and these funds are subject to wagering requirements, occasionally directed to specific sports. During Grand Slam tournaments, the odds of having them focusing on tennis are greater than on a daily basis.

Coral has always been a major supporter of tennis in general and English tennis in particular, so it was only natural for its best promotions to focus on Wimbledon. They run a very popular tennis acca bonus that will increase the profits of those who bet on five or more tennis games simultaneously.

Risk-averse players will be delighted to hear that this is a two-way street and the bookie will also refund all the losing accumulator bets that meet the aforesaid criteria.

In order to cash in on this bonus, one would have to correctly predict all but one of the games and only Wimbledon matches qualify. The maximum amount that can be refunded won’t exceed €25 or currency equivalent and players are also required to make a deposit of at least €5. Once the free bet is awarded, they will have seven days to play through once and whatever profits they can extract from it they get to keep, while the stakes are subtracted.

Betvictor offers a similar tennis treble insurance, but it will reimburse twice as much money, up to €50 if players lose one of the five games. Regardless of stakes they will qualify for this reimbursement, so beginners and amateur tennis punters will benefit most. The free bet needs to be played through at least once and one week after it is awarded, the unused amount will expire.

Betplay runs the generous Roland Garros & Wimbledon Mens Single money back offer that applies to all tennis matches at the grand slam events. Punters can bet on any of the men’s single matches and if their chosen athlete is defeated in five sets, the stakes will be returned to them. They will collect a maximum of €100 and the bonus is subject to 90 times wagering requirements while being forfeited immediately after.

Winner Sports takes mobile and live betting bonuses to the next level and will offer free bets to all those who place at least 20 in running tennis bets on their mobile devices. They don’t have to combine these games and it is perfectly possible to bet on single matches, as long as the odds exceed even value and the individual stake is of at least €10.

This promotion can’t be used in conjunction with other offers, so those who are on track for the Winner tennis loyalty bonus will have to make a decision.

Tonybet is a bookmaker whose popularity has surpassed the borders of Baltic countries and many of its players are hooked on tennis. The bookie will offer a €5 free bet on tennis every day throughout the U.S. Open to all those who bet the same amount on a tennis game. Those interested are also expected to redeem the USOPEN5 bonus code to be eligible for a free bet that is credited to their account each day.