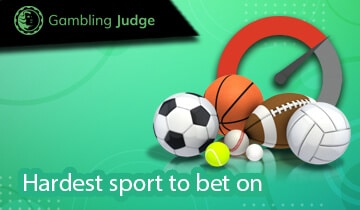 Other challenging sports to bet on include basketball, combat sports, tennis, golf, hockey, and cricket. This write-up looks at the different types of sports and the level of challenges they pose to bettors. If you want to minimize your gambling risk, you’ll know the best sport to gamble on when you read this article to the end.

Hardest sport to bet on explained

Sports betting is the easier way to gamble; however, making money can be a little tricky. It’s true; there are many betting sites offering daily games in various betting markets. Punters use a betting guide to get betting advice about the most unpredictable sport to gamble on. It’s good to read the available tutorials and strategies and look at general betting trends. Remember, what works for other punters may not work for you. The level of difficulty varies from one gambler to another. However, many punters agree that some sports are the most profitable sport to bet on.

Hardest sports ranked: Which sport is the hardest?

Here are individual sports that are hard to place a wager on:

Baseball is by far the most complicated sport to place bets on. It’s a random game, and if you have no betting experience, you may lose money. Sports bettors agree that baseball is the most demanding sport to win money. The baseball game is a battle between pitcher vs. batter. You may have the power hitters in place, but it is a sour sight if they don’t control where the ball goes. Similarly, if pitchers don’t do a good job, then your bet won’t hold.

Is baseball the hardest sport? Yes.

Each game season (league) has 162 games; combining this with weather challenges, players’ streakiness, the teams they play for, and game statistics makes it harder to make accurate predictions. In other sports such as football, the strongest team always has a higher odds of winning. However, baseball has no foregone conclusion that the strongest team can beat even the worst team. The best team can go on a losing streak for many weeks while weak teams win. It’s hard to predict when the losing streaks will end. Baseball can only be profitable if you have the right betting systems. Sharp sports bettors who understand the league inside-out can make money. But for more information read our article about: What is sharp betting? Baseball requires a high-level statistical analysis. If you can combine these statistics perfectly, it will be profitable. Overall, you can also find out if is baseball rigged from our 2022 updated article.

Football is one of the most loved sports in the US; thus, a popular sport to bet on. Besides being the most-watched sport, football is a profitable venture for many bettors.

Different punters rate NFL differently – some find it highly unpredictable while others don’t. Predicting college football or college baseball matches is easy than the national football league. The standout factor is a high turnover in the national football league, which affects the game’s score. This rarely happens in college football. There are a bunch of pros, but the twist remains constant. Good thing; in NFL, rarely do underdogs beat powerhouses. This makes it easy for gamblers to place bets. However, big wins are rare when wagering on heavy favorite Moneylines and a huge debate between NBA vs NFL.

The NCCA College Football league is easier to wager on than the National Football League. However, it has its own level of difficulty. Gamblers can easily make a correct prediction when a top-five team is facing a mid-major, thus, one of the best sports bets to make today. However, when the top teams go head to head, the game is closer to the NFL level. Here, the turnover effect comes to play in this league.

The two common combat sports are mixed martial arts and boxing. Betting on combat sports provide excellent opportunities to place bets, but they aren’t popular sports around. So punters need to do some research, such as how to bet on boxing, to make informed bets.

MMA is among the hardest sports because of the individualism of the fighter. Many factors affect how a fighter performs. In case of a bad night, the MMA fighter may lose the fight. Perhaps the biggest issue with MMA is that it isn’t as popular as other sports. So, there is very little information about it. Besides, the MMA betting prices and payouts are not as impressive as those of other sports such as soccer, tennis, NFL, and NBA. Since MMA is not one of the easiest sports to predict, quite often, betting on it can be a waste of time.

Boxing matches are usually announced beforehand, building anticipation. Experts can analyze the matches by looking at the previous performance of participants. Off nights do occur, especially on the day of the fight, and this may toast your bet. What makes boxing not one of the best sports to bet on is understanding the match-up style. One fighter’s style may not work for all their opponents.

Tennis has its share of power stars – some players are ahead of the others in their play. You’ve probably heard of heavyweights like Roger Federer, Novak Djokovic, and Rafael Nadal. These players dominate the game worldwide. Tennis doesn’t have many gambling opportunities because of the few tournaments, but still, you can find out the best way to bet on tennis. Besides, an underdog can rarely beat a ranked player. Earning a profit in this instance is a bit tricky. So, earning money in tennis is less satisfying than in other sports.

The only thing that makes tennis the best sport to bet on to make money is consistent and predictable. In major tournaments, skilled players win most matches, especially during the early rounds. Reason? They play against less experienced players. So if you place your money on these players at an early stage of a tournament, you’ll win. Of course, the odds aren’t favorable, meaning your winning will be meager. Also, psychological factors can impact the player’s performance.

NASCAR is a highly random sport, making it hard to predict the outcome correctly. The last few laps of this sport are highly erratic, courtesy of the adrenaline rush. Every driver tries to outsmart the other on the track. Where there are many cars, randomness is a factor to reckon. Another major factor is the form of the car beside the driver. Probably, you have noticed some car brands such as Roush Racing, Hendrick Motorsports, etc., constantly dominating NASCAR.

NFL and NBA are major sports in the US, and many gamblers bet on them. Today, the NBA is among the top-heavy leagues in the sports world. Each season, there is a new twist in the play. For instance, it was concluded that the Clippers, Lakers, and Bucks are major players as they stood above the rest before the end of the season. The idea of superteams makes it much easier for gamblers to bet on basketball games in the national basketball association. Many gamblers agree that basketball is more straightforward than most sports, including NFL. Even a novice basketball fan can place an accurate bet on matchups. Remember, like the NFL, NBA has its fair share of big sporting upsets. The regular season/league has unpredictable circumstances that make it hard to win at times. For instance, a basketball team may be defeated at home by a weaker team, but it travels to an away team, it beats it. Sometimes in basketball, it’s about lady luck.

Cricket is a sport similar to baseball; so, it carries an aspect of randomness, making it one of the hardest to bet on. Cricket features loads of random events that might make it hard to follow or predict the outcome. Cricket and baseball have the same formula, and both being major sports in some regions, they are affected by the weather and the players’ psychological preparedness. Remember, you are betting on the outcome of the entire team. While going with the best team matters a lot, consider other factors. Good thing; there are plenty of betting opportunities but check out for price and odds fluctuations for the different teams while betting.

Soccer is the most bet on sport in the world but not a profitable sport to bet on. All gambling sites offer different soccer betting markets, and most people may confuse it with being the best sport to bet on to make money. Far from it, soccer is the hardest sport to go pro in statistically. It needs lots of analysis and understanding of players to win money with soccer betting. Besides, use the right sports betting math systems could help novice bettors to make some money.

You can only win consistently at horse race gambling if you know what it entails. There are very few events, including Kentucky Derby, The Preakness Stakes, and Belmont Stakes. Typically, you’ll be gambling on odds rather than the horse in horse racing, making it a less profitable sport to place bets.

Golf betting is less complicated. There are many tours all year round, giving golf fans a chance to place bets on tournaments. Common tours are PGA, Web.com, and LPGA Tours. Check out the website for the actual dates of a tournament. But before betting on golf, get into the rhythm. Else, it will be impossible to make money. Typically noticing trends among golfers puts you in a better winning position.

FAQ about hardest sport to bet on

It depends on your experience. However, Over/Under, Goal-Goal and Double Chance Bets are the easiest football bets to win.

Basketball is one of the most predictable sport because it has many points and fewer surprises. Besides, the odds are attractive.

Soccer is the most popular sport in the world. According to Sportradar, betting and sports data analyst, about 70% of worldwide betting comes from betting on soccer.

Golf is the least predictable sport. Check its variance, huge fields within majors and the number of talented players.

It depends on how you understand the sport. But College Football, NFL, MLB and College Basketball are the safest sports to wager on.

Each sport has its difficulty level, so knowing which sport is the hardest varies a lot. The best way out is avoiding the common sports betting mistakes and learning how to win at sports betting or  sports betting system by following the available betting tips. Without the best strategies and in-depth analysis, even the most experienced bettors will lose money unless luck is on their side.

Remember, for a professional gambler; none is the hardest sport ever to bet on, but is gambling a sport? Always remember, the best sport to bet on or the biggest sports bet to win is the one making you the most money. Some gamblers may find baseball the easiest sport, while others may find baseball to be highly complicated. Find what works for you, and that might take a lot of trial and error.