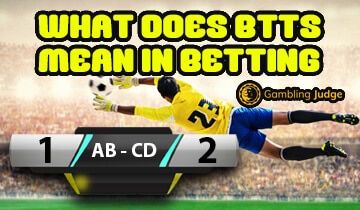 If you are a frequent bettor, we are sure that you have seen the term “BTTS”, especially at football betting sites. Have you ever wondered BTTS meaning? There are lots of betting terms to learn and different types of sports betting, and BTTS is one of them: This is actually a special bet type that offers you high payouts when done right.

And we are here to tell you how to do it right: Below, we will answer what does BTTS mean in betting question first, give some examples, share some tips, and list the best bookmakers to place this bet. Let’s start with the first one: Whats BTTS in betting?

What does BTTS mean in betting?

So, what does BTTS stand for? This the short form of “both teams to score”. It is a type of betting that is most common in football, so we can ask this question as what does BTTS mean in football betting too. Both teams to score bet, as the name suggests, indicates that both teams will score at least one goal in a given match. So to win this bet, in a match between Team A and Team B, for example, both Team A and Team B must score at least one goal.

BTTS bets can be used for a specific match or for seasons and leagues. It is also possible to make them part of betting accumulators. In general, they are divided into two categories, BTTS yes and BTTS no: We will explain them in more detail below. For now, it is enough to learn the both teams to score definition: You bet that both teams will score at least one goal.

➤ In order to win this bet, both teams must score at least one goal during the match. The total number of goals is not important, as long as there is at least a single goal per team. Likewise, who wins the match is also not important.

➤ “During the match” means 90 minutes including injury times. Unless stated otherwise, overtime and penalties do not count.

➤ BTTS bets can be placed as a single bet or a parlay insurance (accumulator) bet.

➤ There are two main categories: BTTS yes and BTTS no. There are other types, like: BTTS and win, BTTS both halves, BTTS over/under. BTTS can also be combined with other bets, for example: BTTS + total, BTTS + exact score, BTTS + penalty, etc

BTTS betting meaning with an example

Since this is a both teams to score explained guide, we should also give a practical example, so you can understand this term better. The example below shows a Betfair both teams to score bet, but this bet type is the same in all bookmakers: You can use the explanations below everywhere.

Step 1
Log in to your favorite bookmaker
Step 2
Pick “football” and any match you like. You can pick other sports too, but football will give you the most options & opportunities
Step 3
When you pick the match, all available betting options will be listed on the screen. Find the one that says “both teams to score” and check the odds
Step 4
Pick any option you like and click on the odds to place your bet

Below you can see an example of Both Team to Score Markets:

Easy, right? So, how can you understand a BTTS bet offers really good odds? To find out, you need to look for the lowest bookmaker margins. The lower the better – a true betting market is 100% but you can never find that percentage: A 100% margin means that the bookmaker won’t be able to make any profit. So you need to look for values as low as possible. Let’s explain with a simple example:

Not hard, right? Now let’s visit the bookmaker B and check the BTTS yes/no odds for the same match. Let’s say these odds are 1.71 and 2.10. The difference is very small, right? However, when we calculate the margin:

BTTS definition according to different types

This is the most common form of BTTS betting and we answered what does both teams to score mean above: Your bet is about both teams will score at least one goal in a given match.

So, what does BTTS no mean? Actually, this is a literal term and you can easily guess what it is about: both teams to score no meaning is that your bet is about both teams won’t score a single goal in a given match.

This can be a BTTS yes or no bet, but you are betting on the score of the first or second half, instead of the whole match.

You are betting on both halves and say that “both teams will score at least one goal in each half”.

You are placing both a BTTS bet and a total number of goals bet. As you know, in over/under betting, you try to guess whether the result of a match will be over or under a specific score. The same applies here too: You predict a goal number and claim that it will be over/under another specific number. You also combine this prediction with a BTTS bet.

Both teams to score no draw is also a literal term: By placing a BTTS no draw bet, you are saying “both teams will score at least one goal and the final result of the match won’t be a draw”.

8. BTTS combined with other bets

👉 The best BTTS strategy you can use is doing research: Track both teams throughout the season and learn everything about them. Check their home/away performances and stats. The better you are at this job, the more accurate your predictions will be. Prefer bookmakers with statistics, they will help you research.

👉 BTTS bets usually have low odds, so in order to get bigger payouts, you can use them in accumulator bets. However, doing so will also increase the risk you take: Even if a single selection loses, you lose the whole bet. So this is an advice on how to win football accumulators: do not exaggerate the number of choices in your accumulator bet.

👉 Cup games and leagues with many goals scored are usually the best choices for BTTS bets. In cup games (Champions League betting, Europa League betting and other important events), both teams perform at their best, so they are very likely to score at least one goal.

We also recommend checking our how to bet on football, profitable football betting, and live betting strategy articles: They will help you to win more often & bigger payouts.

FAQ: Your questions on the meaning of BTTS bets answered

This is another term for “both teams will score at least one goal”. Basically, it is a different name for BTTS bets. It is a type of bet invented originally by Betfred.

This means you are betting that both teams will score at least two (or more) goals each (instead of one) until the match ends.

This means you are betting on both teams will score at least one goal and the score won’t be a tie (there will be a clear winner).

According to statistics, the Dutch Eredivisie and the Belgium Pro leagues have the highest BTTS numbers. However, any competitive global league will be a good choice.

Yes, this option is available at some bookmakers. However, remember that you must place your bet until the match ends (within 90 minutes) and, more importantly, before both teams will score a goal.

You learned what is BTTS: Place your bet today

We explained BTTS meaning and answered what does BTTS mean in betting question for you: It is time to place your first bet. Check the list of our recommended bookmakers, pick one, and join today: You can place a BTTS bet within 10 minutes and score a win today. We will be here to guide you along the way, so don’t forget to visit us often. Good luck out there!