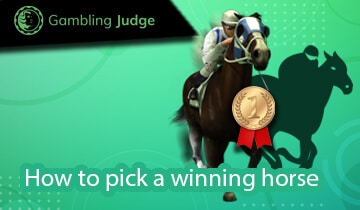 Understanding how to pick horses is one of the most important steps when it comes to maximizing your horse racing bets. For many players, horse betting is not only enjoyable, but also lucrative, and this is why you must put your best foot forward considering the numerous uncertainties in the sport.

Knowing how to pick a winner in horse racing, in addition to other forms of analysis, gives you better odds in this sport. Regardless of how great you are at track betting, your winning horse picks are very vital. Continue reading this guide to find out all the information you need.

Factors to consider to pick a winning horse

Most races come with a form guide and you will find most of the information you need for a good analysis there including horse betting terms. Many factors are to be considered before you pick a winning horse. Some of these factors include:

When looking for how to pick a horse to bet on, you should pay attention to the horse’s daily racing form. You need to know if the horse is in good shape to win the race today. To determine this, you need to check out the past performances of the horse and the race won previously. This can be found in different horse racing bookmakers and betting sites.

What you are looking out for when checking out a horse’s form is its recent finishes. Check the board for the horse’s position in the last few races. When a horse has a good finish like the 1st, 2nd, 3rd, and 4th position in its recent races, this is a good indication that the horse is in good form for the race. Know if it is a front runner or if it prefers a slow race.

You should however know that even though a horse’s form is very important, other factors affect the outcome of the race. Keep reading to see the other factors on how to pick a good horse to bet on.

Just like the ground conditions, some horses can run all distances while others do very well in specific distances. As a punter, make sure you carry out your analysis well enough to know when the horse will do better at a short distance or a longer distance.

A horse’s bloodline has a strong influence on the horse. You can expect to see some features in a horse based on its sire or mare. However, some horses get their features from distant relatives in their bloodline.

Knowing the horse’s breeding and pedigree can be a pointer to what age the horse gets its peak performance.

With age, a horse can get faster or develop more stamina. Horses that increase in speed can run shorter distances and horses with more stamina can run long distances conveniently.

Also, meet the horse’s connections before making your decision. These are the people allowed to speak to a horse’s steward before the race. They can also be the owner or the trainer of the horse. The owner of the horse often decides the jockey’s silk.

Certain jockeys are good with commanding their horses and this sometimes influences your decision.

You need to find a balance here, know how many races ago a particular horse took a break. You need a horse that is relaxed but not too relaxed from its last race. You don’t want an overworked horse because of the possibility of exhaustion. You also do not want a horse that has rested for too long as it will need about two races to get back its form. The acceptable rest period for the horses is about 30 to 60 days give or take.

Racecourses are different from one another so it’s important to know what the racecourse is like when learning how to pick horses to bet on. Racecourses in the United Kingdom and Ireland are particularly different from each other.

Know these different course forms and combine them when picking a horse. A flat horse will not do well jump racing.

You can also check the horse’s past performance on the course. A course win is usually represented by a ‘C’, so check the number of course wins the horse has had on that kind of racecourse.

Look at the handicap mark in weighted horses. In handicap races, horses carry weights that correspond to their ratings. The handicap system gives the horses equal chances of winning the race and the performance of the horse shows if the weight is worth bearing. You will see the importance of weights in races like the Doncaster Mile, Cox Plate, and Melbourne Cup.

Seeing the horse in real-time will help in knowing if it’s a winner. Watch the horse when it’s been paraded in the paddock before the race. By doing this, you can assess the runner’s physical wellbeing, fitness, and temperament before you place your money on it. A calm and composed horse in the preliminaries has a better chance at winning than an agitated horse. You should not put your money on a horse that’s sweaty and appears agitated before a race.

Every horse for a race has odds attached to them which fluctuate as the race is ongoing. You can check the best odds bookmakers to know the odds for the horses in the race.

The odds can go in two directions, they can shorten or lengthen. Shortening odds are high odds and mean that the horse is gaining more support from bettors which indicates the increased likelihood of the horse to win.

Lengthening odds on the other hand shows that the public is losing their trust in the horse.

You can check out different odds at different sports betting sites. You can place bets on multiple horses and use the morning line in predicting odds.

The racecard form tells you the horse’s recent finishing position and it is represented by numbers. If a horse had a third-place finish in its previous race, it is represented by a ‘3’. However, a horse coming third place does not necessarily mean that it is a winning horse, it could have come third place in a three runner race. The race card also shows you which horses dropped in class today.

Some of the factors we have discussed here earlier are represented on the race card. For instance, the letters ‘C’ and ‘D’ indicate the horse’s win on a particular course and a particular distance respectively. Letters ‘CD’ means that the horse has won a race over both the course and distance in question. So

Be sure to look at all the letters and numbers on the race card when picking a winning horse.

Tips and tricks of how to pick a winning horse

We have given different tips on how to pick a winning horse at the racetrack.

Combine them with other forms of analysis to get the best out of your bets. In addition to your analysis, follow professional tipsters like betting gods for credible strategies and betting advice.

When choosing a tipster, the same way you check your horse’s past performance, check the tipster’s history to know what to expect from them.

Doing all these influences your decision on how to pick winning horses free.

Frequently Asked Questions about how to pick a winning horse

First, read our guide on how to bet on horses to get the best out of horse racing. You should know that the first step in betting successfully is picking a winning horse.

Typically, horses carrying heavier weights are faster than others. The better the horses, the more weight they carry

Off-track betting is still gambling so be smart whether you are betting for fun vs betting for profit. There is no hard and fast rule to betting, and winning is not always guaranteed. UK horse racing betting also gives bonuses like moneyback and cashback offers.

Professional gamblers spend a long time picking a horse, they rewatch past races, and read race cards because their lives depend on it. However, if you are betting for fun, you can follow a betting guide and tipsters to make your decisions on how to win at horse racing. Like always, responsible gambling is advised.