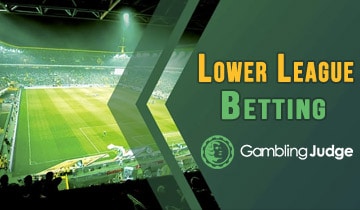 When most punters think of having a stab at the footy, they often run straight to the Premier League, Champions League or other major competitions.

However, there is a case to be made for lower league betting. Betting in the lower leagues is a challenge, and you may not know much about the teams or the players involved.

It can be a risk worth taking, though, as the potential dividends can be far greater than you’d get with a typical Premier League bet.

How so? Throughout this article, we will look at lower league betting.

We’ll tell you why having a stab at betting on so-called “Mickey Mouse teams” can be worth your while.

Let’s begin then, by introducing lower league footy betting to you.

Why Should I Bet on Lower League Football?

The first significant difference between top leagues and lower league football is that you’re unlikely to know too much about the latter. You may be aware of the Salahs, Kanes, Rashfords and Agüeros of the Premier League, but not be so knowledgeable about those rising stars in the basement divisions of league football. Lower league football betting is going to take a bit of homework on your part. Here you can learn more about how to make money betting on football.

Top divisions, such as the Premier League have their share of big, goliath teams, and a few underdogs. Apart from the odd seasons (such as when Leicester won the title), it is relatively easy to predict who will end up where in the table, and which team will nab a result against whom. As a result of this, the odds tend to be somewhat petite.

Drop down into the depths of league football, and you can get quite long odds on matches. In the lower divisions, the teams are far more evenly matched. There is a severe air of unpredictability about these divisions, and this means that lower league betting chucks out some long and juicy odds.

If you do your homework or follow a team in the lower divisions, there is every chance that you’ll have the knowledge to predict matches correctly. Moreover, you may even know more about a lower league side than the bookies, and that gives you a slight advantage.

Bookies still do their due diligence, but not as thoroughly as they would for Premier League matches, as they are what most punters will have a crack on.

A Step Into the Dark: Betting On Unknown Leagues

You aren’t limited to lower league soccer betting on the Championship, League One, League Two or even the National League. Many regional leagues also spring up at bookies. So, too, do the lower echelons of other countries’ football leagues. Serie B, Ligue 2, 2. Bundesliga and Spain’s Segunda División can present exciting odds for the knowledgeable punter.

We wouldn’t stray too far from home and what you know, though. The further into obscurity you go, the longer the odds become, but the less likely you are to know anything about the teams in question.

You can get odds of 10:1 or more on lower division football in Thailand or Iceland (check here our Iceland betting sites) for instance, but we wouldn’t recommend straying too far from home. At least, not in the beginning.

There is a plethora of different lower league betting options out there for you to go with. Most of these will be familiar to punters to have wagered on Premier League or Champions League games before. If you haven’t, you needn’t fret. So if you want to know how to win big on football bets in lower leagues first you need to learn the basic bets:

There are several things which can happen that can affect results when betting in the lower leagues. Take note of these lower league betting tips to ensure that you are prepared for any eventuality:

As you will no doubt have noticed, there is a low of unpredictability when betting in the lower leagues. Many sports bettors consider this a risk not worth taking. However, if you know your onions, then there is a reasonable chance that you can turn this unpredictably into a success story.

If you do your homework, watch matches, learn about the players and recognise the pitfalls (such as those mentioned above), then you may be able to turn unpredictability into an advantage against the bookies.

You may still have questions about lower league betting, and we’ll try to answer them as best as we can in this guide:

Not in the major leagues. Lower league soccer betting in far-flung countries may experience match-fixing. But in the lower leagues of major footballing countries, this is seldom ever an issue.

You could do that, but the chances are that most other sports bettors have the same knowledge, and the bookies will arguably have more. Bookies (and especially your average sports bettor) are not so knowledgeable about the basement divisions. Betting on lower league football may (if you know your stuff) give you an advantage then.

Lower league betting essentially means any division below the top one. In England, this means the Championship, League One and League Two. However, to some it can mean anything which is not strictly speaking “league football”, so the National League, Northern Premier Division and others, for instance. The further down a country’s football pyramid you look, the more “lower league” the competitions are.

Yes. You should avoid betting on any lower league competition that you know nothing about. The odds are often very attractive for these competitions, but you’re essentially betting blind. Always learn a thing or two about a lower league before having a punt on it.

If you fancy your chances of getting on over on the bookie, then we’re ready to help. We’ve got plenty of leading sportsbooks which we can recommend on this site. All provide lower league betting options for you, and some have quite a range to choose from.

Just remember to pick wisely and do your homework before starting out. Once you’re ready to go, select one of our bookies to start betting on lower league football today.